Hans Baumann // BRICS Countries Could Pose a Challenge to US Hegemony 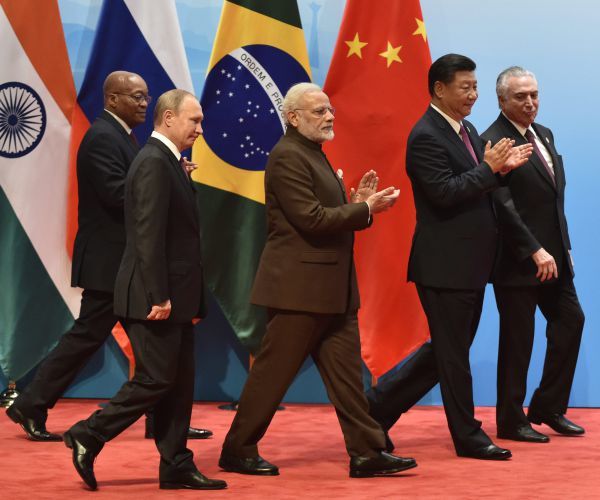 The BRICS countries, a loose alliance of five countries representing about 23 percent of global wealth, had their annual meeting on September 3, 2017, in Xiamen, China, attended by their respective heads of state from Brazil, Russia, India, China, and South Africa. These countries have a total population of close to three billion people.

The official goal of the meeting was closer economic cooperation; the less openly stated goal was to change “from Western Governance to Joint Governance,” certainly a challenge to U.S. leadership.

Besides economic goals, the aim is closer cooperation in foreign policy matters indicative of the close alliance between China and Russia as exemplified by the recent joint naval exercises north of Japan and east of Korea. However, all is not well in this regard between China and India due to their festering border dispute in the Himalayas.

Yet, all is not as it should be. There are still many cultural and structural problems between the members, such as over-capacity in some Chinese industries and a serious imbalance between light and heavy industries in Russia.

Another important aim of the BRICS members is to oppose the perceived stranglehold by the U.S. dollar. In order to accomplish this, China created a joint Bank for Economic development, located in Beijing. It is initially financed by contributions of $10 billion from each member country. One must realize that at this moment, China holds $1.15 trillion in U.S. bonds which would provide ample capital.

The aim is to create a financial counter-weight to the U.S.-dominated IMF (International Monetary Fund) except in this case the governing currency would be the Chinese yuan.

In line with this thinking, China recently announced that all future Chinese oil trading has to be conducted in yuan instead of dollars. In order to give the yuan creditworthiness, China pledged to back up those entire yuan contracts in gold. This could imply that it would make China the first country to revert back to a gold standard. To that extent China claims to produce about 450 tons of gold per year and has reserves of 12,157 tons of gold, which is equivalent to $500 billion in current prices.

There is no question that China will dominate the BRICS countries, having now surpassed the U.S. in terms of purchasing power parity, $21.4 trillion vs. $18.6 trillion. They also are trying to tackle the problem of an aging population in 2016 by passing a law eliminating the prohibition of families having a second child. As a result, as of now, 51 percent of all new babies are second children in a family.

Should we have to worry about the BRICS? Not in the foreseeable future, but they need to be watched.

As an afterthought to my last blog about the climate report, I forgot to comment on one of the key arguments put forward by the “concerned scientists” and their allies in the public press, which is: That the polar ice cap is melting and, pretty soon, sea levels will rise and Florida will be underwater. The facts are otherwise. First, ice expands when it freezes; this lowers its weight per cubic foot. This is the reason that the ice floats on water. Assuming all the hundreds of thousands of square miles of sea ice melts, what will happen? The answer is nothing. There will be not a single inch of increase in sea level. Why? Because the ice shrinks again and resumes its former liquid state; there is no added mass.

To prove this is easy. Take a glass full of water, add an ice cube. Now carefully mark the liquid level on the glass. Wait untill the ice has melted. Lo and behold, the liquid level stayed exactly where it was with the ice cube in it.

I sincerely hope Floridians will sleep sounder having read this story.

Hans Baumann is a licensed engineer in four states and a member of Sigma Xi, the Scientific Research Society. He is an adviser to the dean of the University of New Hampshire Business School. Dr. Baumann has published manuals on valves and was a contributor to many works including the "Instrument Engineers' Handbook" and the "Control Valves Handbook." He has also published several books on business management and German history, including "Hitler's Escape," which suggests that Adolf Hitler did not commit suicide and survived World War II. In his latest book, "Atomic Irony" he proves that the Hirshoma Atom Bomb contained captured German Uranium.