Roberta Ciampo, University of Rome La Sapienza. Expert in International Relations. Research Project in China at the Fudan University of Shanghai on thetheme: "The BRICS Cooperation as a new project of development. The case of China

The need to face the infrastructural gap and the lack of resources among the BRICS countries had induced governments to create in 2015 their own financial institution, the New Development Bank (hereinafter NDB), whose task was firstly and foremost to coordinate the different infrastructural needs, and secondly to maintain the main focus on sustainable development.

However, since it was born recently, this new institution is still confronted today with various obstacles: how to define, build, measure and monitor sustainable development? How to incentivize investments? How to formalize these commitments with the interested parties?

1-For a new approach to multilateral development financing

The attempt to start a new kind of development stems from the individual national experiences of the BRICS countries, and from the sharing of common challenges, such as poverty and inequality. These challenges require the promotion of initiatives that are based on territorial realities, on different social and geographical contexts, and require greater guarantees for more equitable and inclusive benefits.

In recent decades, western investors have concentrated resources on one-way programs to reduce poverty or promote economic growth, while underestimating the role of infrastructures. This is partly due to the political costs associated with large-scale investment projects in the field of infrastructure, not counting the opposition from activists and civil society organizations; on the other hand, the traditional investments in infrastructure are often subject to criticism of social, environmental and human impact they cause on the territories. These practices highlighted the need for inclusive projects that promote the effective development of society as a whole.

Therefore, this translates into an imperative for the BRICS countries to ensure infrastructure development that is sustainable in all its forms.

In its first phase, the NDB will then have to put forward solutions, explain the reasons for its choices, if it wants to avoid replicating errors made by competing world institutions, but above all to lead a new radical approach to multilateral financing of development.

The simplest way to define a sustainable infrastructure development is to build it on the basis of three pillars: economic, social and environmental performance, obviously supported by the financial feasibility of the project. The ability of each pillar to produce effects on the sustainability of development will then depend on the national development priorities of the individual BRICS countries. In 2017, the Board of Governors of NDB implemented its first strategy for the period 2017-2021, arguing that the Bank intends to be "new" in three areas: Relationships, Instruments and Approaches. In each of these areas there are opportunities and challenges for the promotion of sustainable development, as demonstrated in fact by the percentage of two out of three of the projects dedicated to it.

The Relationships. Regarding the Relationships, the BRICS countries are both shareholders and borrowers of the NDB, as already known by the evident horizontal approach used in the South-SouthCooperation. The NDB could then become one of the major pillars able to support the development of the Global South through the Global South itself. In other words, the intent would be to encourage horizontal relationships and to build spaces for innovation and solutions adapted to the specific needs of the five countries, while respecting their priorities and strategies. In reality, this configuration is not at all surprising, since respect for territorial sovereignty continues to be a particularly sensitive issue for all member states. In any case, the NDB remains firm in supporting its commitment to a form of financial cooperation that entrusts the ways and strategies of project implementation to national laws, without these being in any way bound to economic or political conditionalities.

However, we must highlight some weaknesses of this model, which mainly consist in the lack of clear methodologies and tools, which are able to evaluate and strengthen the system of borrower countries, especially when these are not at the same level of internationally accepted standards.

On the one hand, the internal structure of the NDB encourages equity, mutual respect and trust among member states; most decisions are taken by simple majority; no member state has veto power; it is a structure that facilitates the initiative towards national and regional development banks, demonstrated by the fact that the NDB is willing to open access to other countries in order to increase the geographical diversity and dilute the homogeneous influence of countries with different degrees of development. On the other hand, however, the criteria for selecting projects and allocating funds are not clearly defined; the imperative of sovereignty could also clash with the need to ensure that the projects do not reproduce the typical donor-recipient inequality ratio.

The Instruments. With regard to the Instruments for infrastructure investment projects, it should be noted that the focus is primarily on sustainable infrastructure, and to this end the development of national technical knowledge and not imported from other models is encouraged. Some obstacles, however, would seem to undermine these ambitions: starting from the very concept of "sustainable infrastructure", that reveals a contradiction in terms, as already highlighted by Hochstetler, who affirms the incompatibility between sustainable development and investment in infrastructure. Hence, the need for clarification both on the type of sustainability that is intended to be achieved, illustrating the ways in which projects are funded or establishing methods to evaluate the development levels accomplished.

The Approaches. The third area in which the NDB declares its originality concerns the approach used. The NDB aims to decrease the period of time necessary for the approval of projects and its funding, a reduction of 6 months, compared to the 14 months required by the World Bank. A reduction that could, however, show its limits and be an obstacle to the success of the project, if it is determined at the expense of the social and environmental sphere.

Sustainable development and support to emerging markets through investments are two complementary elements. The NDB can not only encourage foreign investment, but it could also emerge in the coming years as a primary source of finance for developing countries.

The Bank uses a risk-based approach to project approval and oversight that imposes more intensive ex-ante reviews for complex projects that are risky from both a social and environmental point of view, while low-risk projects go through a more streamlined with ex post controls. Staff performance indicators and incentives should be geared towards evaluation, disbursement and risk outcomes, rather than the number of projects approved by the NDB staff. However, the lack of clarity on how to measure performance persists.

The intent of this article is then to propose suggestions and provide indications for a dynamic and innovative growth of the Bank:

At the present time, the NDB is in the initial phase of planning and organization (we recall that its inaugural strategy embraces the period 2017-2021) and therefore it remains unclear how far it will be able to define the financing framework for international development. New partnerships, innovative approaches, unprecedented opportunities to unlock new funds for developmentare emerging on the horizon, but all these elements need to be combined with clear methodologies, risk assessment indexes, shared guidelines andsystems for monitoring the performance of projects.

The NDB’scommitment to sustainable infrastructure is perhaps the most significant element that can distinguish it from the methods of multilateral development banks. As already mentioned, the NDB itself defines sustainable infrastructure as "the infrastructure that coordinates economic, environmental and social criteria in its projects and operations", adding that the introduction of these criteria derives from the awareness that traditional evaluation methods fail to account for several factors for sustainability that have a major influence in the medium and long-run.

In other words, the NDB’s strategy recognizes the importance for sustainable infrastructures to "move beyond short-term", but it seems to require more time to clarify its critical points, to name a few, the hidden costs and risks of not applying a sustainable lens to the global development.

Birth and Evolution of the New Development Bank

It was at the fourth BRICS summit in New Delhi (2012) that the leaders of Brazil, Russia, India, China and South Africa took into consideration the idea of ​​creating a New Bank to mobilize resources for infrastructure and sustainable development projects in the BRICS countries and in other emerging economies; but, only after agreeing the financial feasibility of this initiative, during the sixth BRICS summit in Fortaleza (2014), the leaders signed the agreement establishing the New Development Bank (NDB).In the statement by Fortaleza, the leaders stress that the NDB will strengthen cooperation between the BRICS countries and will complement the efforts of multilateral and regional financial institutions for global development, thus contributing to collective commitments to achieve the goal of strong, sustainable and sustainable growth. balanced.

The inaugural meeting of the Board of Governors of NDB was chaired by Russia and was held on the eve of the Ufa summit on 7 July 2015, when the Bank officially entered into existence as a legal entity. During the meeting, the appointment of the President, Mr. K.V. Kamath, as well as four Vice Presidents and the Board of Directors.

On 27 February 2016, both the agreement with the Government of the People's Republic of China concerning the bank's headquarters and the memorandum of understanding with the Shanghai Municipal People's Government were signed; with them the NDB became fully operational at the BRICS Tower in Shanghai.

On 17 August 2017, the New Development Bank officially opened the Africa Regional Center (ARC) in Johannesburg. The opening of this branch will be an important contribution to the development of sustainable infrastructures in South Africa and marks the fulfillment of a commitment assumed by the founders of the Bank in its Articles of Agreement.

Below is the organizational structure of the NDB: 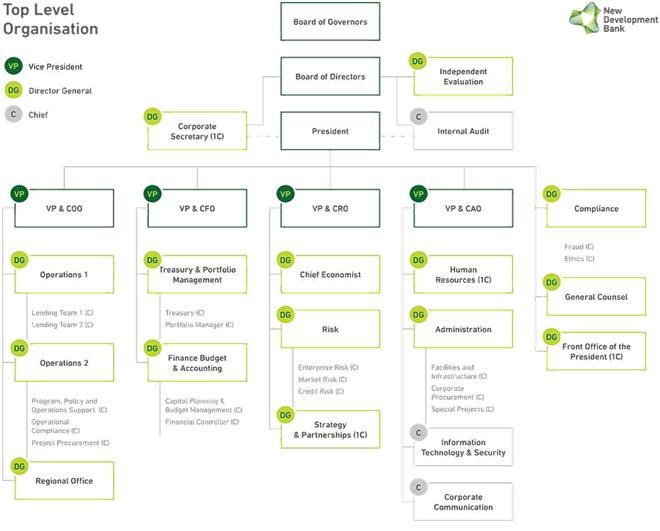 The New Development Bank’s purpose is to support infrastructure and sustainable development projects in BRICS and other emerging economies. Our work complements the existing efforts of multilateral and regional financial institutions for global growth and development. To fulfill our purpose, we support public and private projects through loans, guarantees, equity participation and other financial instruments. We also cooperate with international organizations and other financial entities, and provide technical assistance for projects to be supported by the Bank. In addition to financing development projects, we engage in informational, cultural and personnel exchanges with the purpose of contributing to the achievement of environmental and social sustainability.

In 2016-2017, the Board of Directors approved financial assistance loans of over USD 3.4 billion for projects in the fields of green economy, renewable energy, transport, water resources, irrigation and other areas.

Below is the list of projects implemented and those under construction: 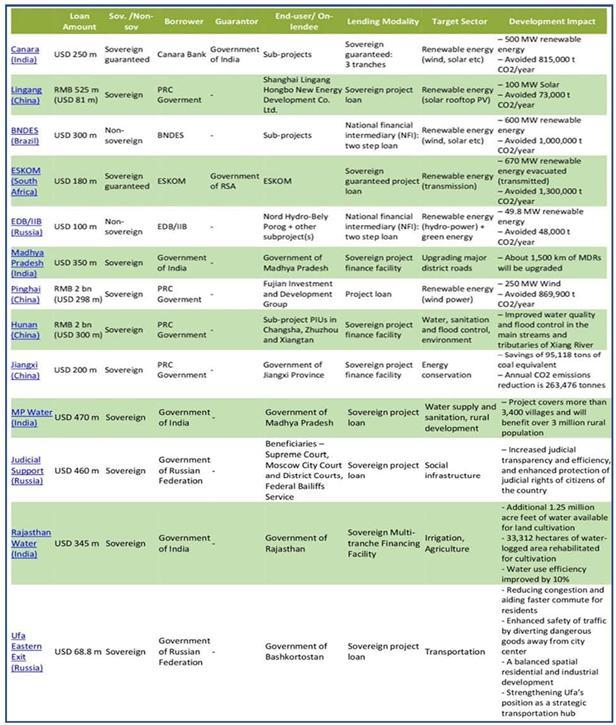