International youth forum "BRICS Plus" will be hosted in New Delhi from 14 to 15 December, 2021. 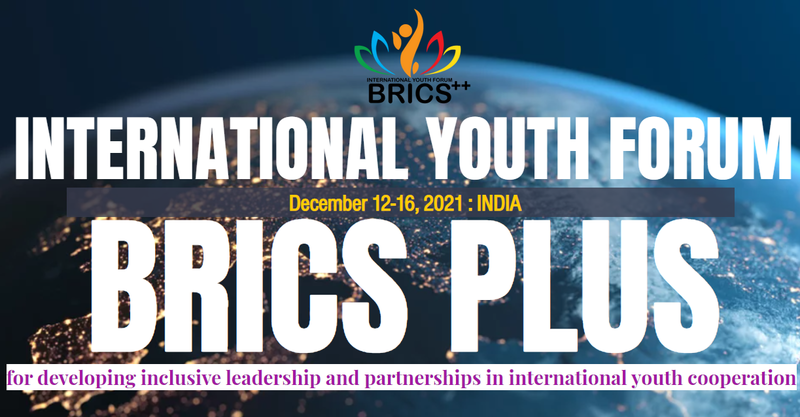 The International Youth Forum "BRICS PLUS" is intended to unite youth leaders, public organizations, youth activists, researchers, scientists, entrepreneurs and students from the BRICS countries and neighboring countries to build an inclusive partnership among young leaders to spread the idea of cooperation with BRICS and creating awareness of the opportunities within BRICS and creating a positive image of the BRICS block at people-to-people level, encouraging international youth cooperation.

The Forum is organized by the International Youth Edu-Skills Foundation with the support of the Alexander Gorchakov Public Diplomacy Fund and in partnership with the Russian National Committee on BRICS Research.

The main goal of the International Youth Forum "BRICS PLUS" is to build inclusive partnership between young leaders and to raise awareness of the opportunities that the BRICS bloc can provide them and their countries.

The objectives of the BRICS PLUS International Youth Forum are:

•Raise awareness about BRICS among youth and explore the opportunities.

•Develop inclusive leadership among youth for cooperation with BRICS.

•Share knowledge and information on the recent development in the field of art, culture science, business and academic spheres within BRICS countries.

•Encourage young people and the people around them to develop a healthy lifestyle and environmental protection concept.

•Review the BRICS results of BRICS Chairship in 2021 and prepare proposal the for the BRICS leadership in the framework of BRICS PLUS.

•Cooperation in the field of youth leadership

•Lectures on BRICS History and Global Governance and cooperation within BRICS

•Session on “Education opportunities in BRICS”

•BRICS Plus for Environment “Tree Plantation”

•Realization of projects and cooperation agreements

•Partnership agreements on cooperation between the organizations of the participants

•Creating a voice for BRICS in other countries, as well as raising awareness among the citizens of the BRICS countries